I come from a Portuguese family and my parents are bilingual. Growing up they spoke both English and Portuguese at home, and still do. While I picked up some of the language, I am not fluent in Portuguese and to this day I wish that I were bilingual. Now with children of my own I would like for them to be exposed to another language, and I encourage my parents to speak Portuguese around them. As a mom who loves to read with her kids, I really like the idea of using books to introduce my children to another language. This is why I think author Tim Johnson’s dual-language book called Bosley Sees the World is such a wonderful way to do that. 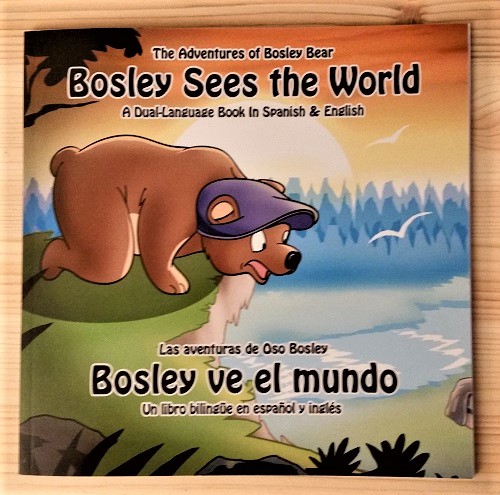 The book is written in English and Spanish, and on each page there are English words highlighted in green, with their corresponding Spanish words also in green. This makes it easy for children to follow along in each language. The end of the book also has a glossary of different words found throughout the story in English and Spanish. This is a great way for kids to review what they have just learned.
This delightful story follows an adorable bear named Bosley, who is curious to know what lies beyond the tiny cave he lives in with his mother. So Bosley sets out one day to explore the world around him — the trees in the vast forest, the river winding through the valley and the tall mountains towering all around. Bosley had no idea the world was such a large place to explore, with so much to see!
Bosley is like all children: anxious to learn about the world all at once, only to realize that there is so much more to discover than expected. But with their whole lives ahead of them they can learn and explore one adventure at a time.
*Note: this book was provided to me by the author. All opinions are my own.
Learn more about Bosley on Facebook! 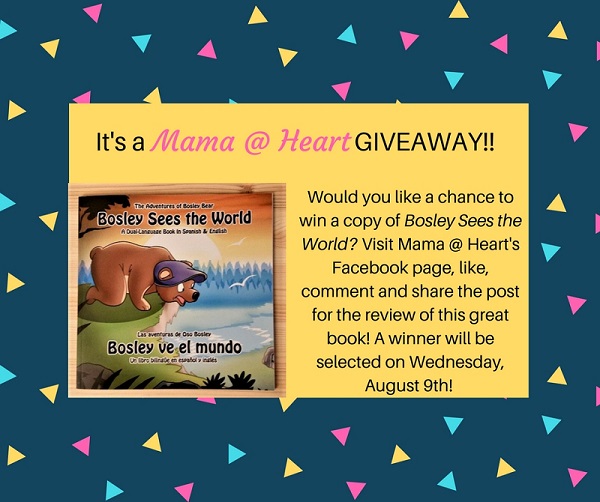 Book GIVEAWAY!!
To enter:
Go to the Mama @ HeartFacebook page