Last fall I came across a company called Peaceable Kingdom that makes games for kids. Our family loves to play games together so I was looking around the internet for family-friendly and age appropriate games for my son and daughter. One of the first things that I liked about Peaceable Kingdom was when I was browsing their webpage and saw that they create "games and gifts that inspire cooperation and cultivate kindness." I loved that their goal is to combine these two things and make it fun at the same time. While most games are competitive, and there is nothing wrong with a little friendly competition, Peaceable Kingdom’s games aim to get players working together. 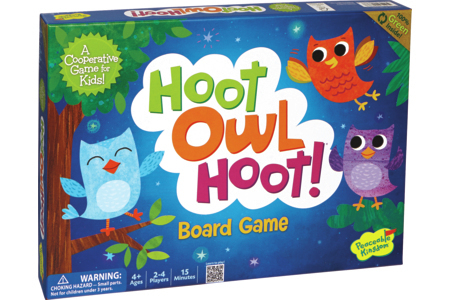 Photo credit: Peaceable Kingdom
One such game from Peaceable Kingdom is called Hoot Owl Hoot! The goal of the game is simple: players use strategy and cooperation skills to get their owls to the nest before the sun comes up. In order to accomplish that, players take turns selecting from a stack of cards. If they draw a colour card they are to move one of the owls to the next available spot in that colour. If they draw a sun card, the sun token is moved.
My favourite thing about this game is that it promotes team work, as players together find the best way to get all the owls to the nest. The first time we played the game my son and nephew really enjoyed it and had fun getting the owls to the nest together! They even took the game to another level by using their imagination and pretending they were racing the sun to get the owls safely home.
The suggested age group for this game is four years and older, and I would agree with that. While the game has simple instructions to follow, children under four may not grasp the team player mentality behind it. Note: my daughter is three years old and was mostly interested in playing with the owls on her own.
All in all, this is a great game to practice colour matching, strategy, team work and social skills.
*Game was provided by Peaceable Kingdom. All opinions are my own.